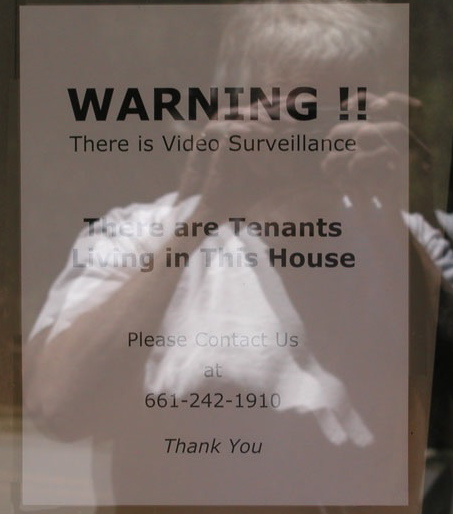 I’ve mentioned these guys in my prior posts but they deserve a 21-gun salute.  If it were not for companies like the nationally operating property management company, the banks could not effectively mismanage the properties they acquire after foreclosing and throwing people into the streets.  This company advertises itself as a property preservation or property management company working on behalf of banks and mortgage servicers like my bully bank defendants.  I have affectionately named this company “PMS”.  All women of child-bearing years will recognize the level of my affection for them.

“PMS” is the go-to guy if you want a home “trashed out” fast.  That’s the term being used to describe cleaning out a foreclosed property so the banks can resell it quickly.

The way they work is that they hire local cleaner-uppers and property maintenance “specialists” to show up at your house to clean it out.  Here’s the problem:  you could still be living in the home or not.  It just so happened that I was and therein became the grounds for my lawsuit.

Not only was I still living legally in the house, but I was home at the exact time the crew showed up with their giant trucks and multiple men to do their dirty work.   I confronted them which was a harrowing experience particularly since I was a woman at home alone.

I’ve previously mentioned that some of the defendants in my case thought it was funny that I was actually upset over what had happened to me.  Other defendants argued that the event never happened, that it was a figment of my imagination,  and good old “PMS” told me God did it.  I love that one.  I really do.  It’s made a believer out of me.  It was always a running gag to say that bad things happened because “God hates me.”  Now, an officer of the court has confirmed that to be true.   I am both happy and sad.  Happy that I was always right (because everyone wants to be right about something) and sad that God truly hates me and that there’s nothing I can do about it.  You can’t change first impressions.  I remain bummed over this realization but determined to go forth and live a life that’s worthy on some level.  Maybe HE will forgive me in the end.

Anyway, the local crews that show up don’t have keys to your home.  They certainly didn’t have one for mine.  My local trash-out company defendants admitted it.  They’re expected to break in through the side or back doors or even through a window to gain access then they change locks and put lock boxes on the front door.  These local crews will clean out the house of your belongings and then proceed to do whatever it takes to make the house presentable and ready for resale.   One poor man down south, as alleged in his lawsuit against the same property management company, had everything he owned stolen when a crew broke into the wrong home while he was on vacation.

Imagine coming home to find your property so vandalized.  Think about it.  If a crew broke into your home to clean it out and found your cash and jewelry, do you really believe the workers would just pop your stuff into a baggy and put it in a safe for you to claim?  Or is it more likely that the workers  breaking into your home would just pop your stuff  into their pockets and onto their trucks for redistribution to themselves?  My goodness, it’s your neighborhood “socialists” in action.

The local crew that “PMS” hired said they came to my home, a few words were exchanged and then they left “without incident”.  The evidence supplied to me tells another story … no, a few other stories.  The crew told “PMS” alternately that they couldn’t even get close to my house because some lady was screaming at them (that would be me) and the other tale was that they saw an open window that they decided to pry open wider … and then some lady caught them and was screaming at them.  The only consistency in their stories is the bit about the screaming lady.  “PMS” denies that the local crew did any work for them, yet everyone admits that the local crew was ordered to and did take photos of me and my home which constitutes work for “PMS”.

“PMS” refuses to take responsibility for anything, even though they actually tell their contractors how to proceed if they mistakenly break into a home later “discovered” to be occupied – “re-secure” the house and run away without telling anyone you’ve been there.    I’m lucky I wasn’t in the shower when these creeps showed up.  Oh, well, what’s a woman to do?  We all know by know that God’s calling the shots.

From now on, instead of lying awake at night praying for God to help me, because he’s already made it clear that he hates me, I’m going to just curse him for giving me the determination, without the requisite education and money, to prosecute my lawsuit to the fullest extent possible.  AMEN.  On the other hand, if I get a good acting job soon, I’d like to say, Thank you, Jesus!

Author Ginger Marin is an actor, freelance writer and storyteller.  You can also find her on Google+